Today I had another run scheduled, so I decided instead of doing the usual 3 mile jaunt that I do that I should try to go a little further.  I decided to run from the office to the house, which was going to be 4 miles or more, depending on the route I took.

I started out just like normal, except I realized that it was a bad idea to have pounded a ton of water like an hour before running.  I reached a local park by the time I had gone a half mile, and since the dialogue in my head was somewhere in the range of "OhmybabyJesus I have to peeeeeee", thought it was best to stop and use the park bathroom.  I was pissed to find the nice bathrooms were all locked, but they had a portapotty open.  Beggers can't be choosers so I ducked in, and it was actually pretty clean and did the trick.

I got back on the road and started going, and something amazing happened.  I got through the first mile and said to myself, "That actually wasn't so bad."  That has NEVER happened.  I also didn't need to take a walk break immediately after hitting the first mile, which is the first time in a long time that's happened.  I took a quick walk break at 1.40 miles, and then began running again.  And then something even more amazing happened...I didn't stop running.  I just kept going, and all the while I was thinking how great my legs felt, and how much more breath control I had than Tuesday!  I literally was waiting for the moment my body was going to scream for a walk break, and that moment never came.  It started storming, and I just kept on going.  I came to the point in my route where I was either going to have to turn and go the 4 mile route, or continue down the longer way.

I took the longer way.

I hit 4.5 miles and I was still running.  I felt thin, pretty, athletic, strong and capable of everything.  I rarely feel this way about myself in normal life, and have certainly never felt it when I was running.  My legs still felt good, though I was getting tired.  Even so, I could see my street getting ever closer, and I was STILL running. 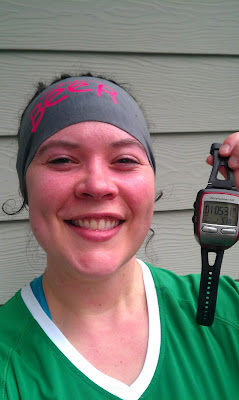 I was cracking up when I saw that picture, because I forgot how awesome my hair curls the second rain water touches it.  I don't know what it is about it, but my hair loves it.  I had all kinds of curly q's around my face when I took my Bondi Band off.  Also, here is a picture of my Garmin, since you can't see it that great in the picture: 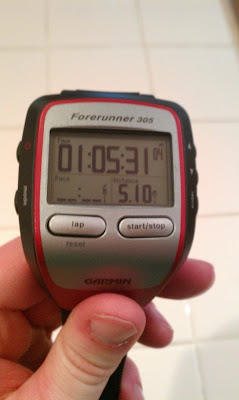 I have absolutely no idea what was different today.  I ate just about the same stuff that I normally do, I used the same amount of points.  I drank the same amount of water.  All I know is that I desperately needed a day like today to remind me of why I love running and why it's so worth it.

Posted by Runs To Get Waisted at 8:49 PM