So when we left off yesterday, I was revved and ready to run a longer run, only to find out that my Garmin 305 wouldn't turn on.  I was completely upset not only that my Garmin was broken, but that I had my heart set on a long run that would challenge me, and now I couldn't even measure how long I'd run or my pace!

I finally decided that the run had to happen, Garmin or not.  I remembered that I had downloaded the Run Keeper app during one of the times I was super pissed at the Garmin for taking almost 5 minutes to find satellites on a sunny day.  I thought it would be the perfect thing in a pinch, so I enabled the GPS on my phone and went to use the app.  It...is...worthless.  I was standing on a busy street on a gorgeous sunny day, and it kept saying that it couldn't find my location!  I'm obviously not going to give away where I live, but let's just say that it's not in the middle of the boons, and that any GPS worth its salt should be able to find my location!  I tinkered with it for a bit and finally the signal conceded that it was "poor", but at least existed.

So off I went, and I couldn't believe how good my legs felt!  It was night and day from my two previous runs, and it made me scold myself extra hard for ignoring my Yin Yoga DVD for so long!  I felt so good once I got going I decided that I was going to do 7 miles, which would be the longest distance I've ever run in my life.  I checked my phone and the Run Keeper app until I hit 3.5 miles, then turned around.  The last couple of miles was really rough, and I was walking a lot more than I was running, but I could still didn't feel that overwhelmed.  I was just super stoked and proud that I pushed myself at all.

I was almost home when I looked at my phone and saw that my supposed distance was 6.5 miles.  I was just like "whaa???"  I turned around at a little past 3.5 miles, which meant that I should have been at 7 miles by then.  I mean I am horrible at math, but even I know that 3.5 miles out and 3.5 miles back should equal 7!  That's when I realized that the Run Keeper app is officially horseshit, and it made me really sad and really mad at the same time.  My heart sank when I realized that I probably had not run 7 miles at all, but probably a lesser distance.  Sure enough, when I came in and checked a couple different run mapping sites, they had the distance in the 5.88 to 5.93 mile range.  I was SO upset.  I really thought I'd challenged myself and done the longest distance ever in my life, instead, I didn't even do a 10k.

I sulked for a long time and was really pissed, but then I decided to just snap out of it.  While I didn't hit the long distance I set out to hit, I did do the longest distance I've done this year since I started training.  I got up on a sunny Sunday morning and ran instead of staying on the couch watching a Game of Thrones marathon.  I could have just said "screw it" when my Garmin broke, but instead made do with what I had (even if what I had sucked!)  And once I came in, I ate a healthy lunch and a couple of healthy treats (popcorn and strawberry "ice cream" made with yogurt and frozen strawberries) instead of walking to the local burger joint like I wanted to.  I also lost 5 pounds this week, and THAT'S something to be happy and proud of.

I took a picture of myself after I was done running...you've got to love a good post-run lobster face!  Even though my skin looks like a tomato I actually kind of like this picture.  My face looks thin, and I look happy despite how irritated I was about the GPS shenanigans. 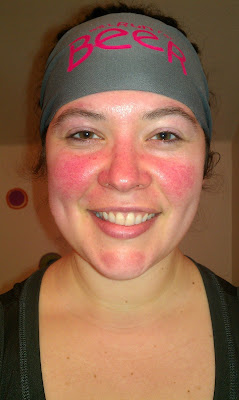 And since I think everyone likes a happy ending, I can tell you that not all technology is a huge fail.  I poked around on the internet and looked to see if anyone else with the Garmin 305 had issues with it not turning on.  After reading advice on a couple of running blogs, I am happy to report that I was able to get my Garmin working again!  I literally had to hold down a couple of buttons while pushing another on and off, but when it lit up and turned back on, I just about had a parade outside of my house.  I wish I had done that before my run, but all's well that ends well I guess!
Posted by Runs To Get Waisted at 4:55 PM