First of all, I definitely want to acknowledge how long I've gone without posting.  I don't want to get too far into it since this post is specifically a race report, but yes, it's been a long time.  All I can say is that things have been tough lately, but are getting better.  I'm hoping that yesterday helped me turn a corner to where I'm back on my game and am posting with more frequency.  Now that that's settled, I am happy to report that I ran an 8k yesterday!  (The Shamrock Run in Portland)  It's something I've been dreading for a month, because I haven't been training AT ALL.  It's one of those things where time got away from me, and then suddenly what do you know, I have almost 5 miles to run!  Eric signed up for the 5k, and I think we both had fears about the race, and considered not doing it at all.  But I knew deep down that I needed to do the race in order to get back on track.  Races always give me a great boost and make me realize why I love running, and I knew that no matter how badly I did that it would still give me the push I needed to get back to normal.

Getting up on Sunday morning was rough, and we were both super grouchy about it.  Race morning is always the worst, and I never do anything that I should do, such as drink water or eat a balanced breakfast.  I guzzled a cup of coffee and a bowl of cornflakes with almond milk, and that was pretty much all I could stand.  I had wanted to get up early and do yoga to stretch out a little, and that didn't happen either!  I had managed to lay my clothes out the night before, but then Eric asked if he could wear the long sleeved tech shirt that I had, so being the good wife I am, I handed it over!  He also borrowed my running pants (btw, all of my gear is men's stuff since it fits better), so I kind of had to piece together a random outfit of a short sleeved tech shirt and some crop yoga pants.  I almost didn't bring a hoodie and Eric was like, "um it's 39 degrees and freezing outside", so I grabbed one out of the closet and was SO glad I did.  It...was...cold!

We took the MAX down to the race, and our jaws dropped a little when we got off at the race stop.  It was completely packed on the waterfront.  Reading that 35,000 people are running the same race doesn't prepare you for stepping out and seeing 35,000 people!  We were literally having to shoulder our way through like we were at a concert in order to make it to the packet pickup line to get our bibs.  It was SO cold standing next to the Willamette river that I couldn't even pin my bib on or put my timing chip on my shoe, and Eric had to help me.  Once that was all over and done with, it was a waiting game until my race started, so we walked around to see the booths, and we ran into this: 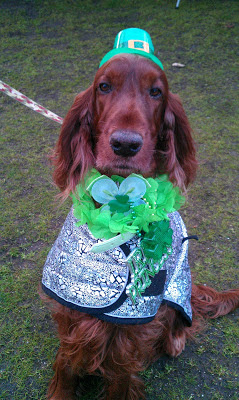 I mean can we just all agree that's the cutest thing ever?  It was an Irish Setter rescue group, and they had probably 10 dogs there.  I have always been dog crazy, but ever since Natasha died I am totally psychotic about petting any dog I see, simply because I miss having a dog to love on.  If there is a dog in a mile radius of me, I will go pet and play with it.  Throw in a dog with a tiny leprechaun hat and a coat, and you're never getting rid of me.  We petted on the dogs for several minutes, and one of the guys who worked there got this one to sit nicely for me so I could take a picture.  Eric and I agreed that it was going to be our meeting spot after the race since we were going to be separated for a bit, which meant that I was going to get extra time after the race to play with the Irish Setters!

Soon it was time for me to line up, which they were doing by pace.  I picked the over 10 minute mile group, since I felt I was probably going to have to walk most of the way.  And just to give you an idea of what my starting lineup looked like: 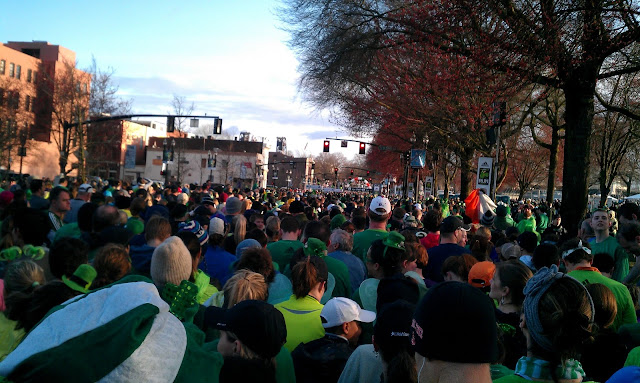 Yeah that's the sight of almost 10,000 people doing JUST the 8k.  (I heard the 5k numbers were more like 12,000 people).  It took me almost 10 or 15 minutes just to cross the starting line once the gun went off, that's how many people there were.  Also, can I quickly add how much I HATE "Gangnum Style", have always hated it, and always will hate it?  For the life of me I cannot understand why people like it so much, and I'm especially bitter because during the 10-15 minutes I was waiting to get across the starting line, I heard it in a loop probably about twice.  STUPID.  Anyway, I just needed to put that out there.  Once we crossed over the starting map, things loosened up a little and I was able to actually run!  Things were going along normally, and then 5 minutes into the race, something happened that NEVER happens in Oregon in March.  The sun came out.  It was pretty, it was unexpected, and it was HOT.  I ended up having to unpin my bib and rip off my hoodie because I felt like I was going to pass out!  I was actually thrilled to be wearing my short sleeved tech shirt at that point!

As I ran along, I was miserable the first mile the way I always am, but I was also shocked that my pace was pretty much the same as when I was training faithfully.  I trotted along until about 1.2 miles in, then had to take a walk break.  I jogged and took walk breaks for the rest of the time, though I tried to keep the walk breaks as short as possible.  I looked down at my Garmin at points and was completely shocked that I was doing as well as I was doing (well for me anyway).  I got a half mile away from the finish line and realized, "Holy crap, I am going to finish this thing in an hour", which was amazing to me since I thought SURELY it will take me an hour and a half.  And that's what I did, I finished in an hour and 12 seconds.  I felt so unbelievably proud of myself, which is something I've needed to feel after a rough couple of months.  My confidence felt boosted, and I felt so happy that I almost regretted not running the 15k!  But that's a big ALMOST.  ;)

Post race was a little weird.  Eric's 5k group left an hour after mine, and I figured that it would take him about 45 minutes (he said he was going to have to walk most of the race), so I definitely had time to kill.  I so badly wanted my beer, but the lines were so insane that it likely would have been an hour or more wait JUST to get your ID checked.  And much like Sweet Brown, ain't nobody got time for that.  I was starving and almost wanted to break down and eat the stinky salmon chowder they had for the runners, but the lines for that were also blown out.  I was definitely not waiting in line for over an hour for fish chowder after running.  I decided to take a walk along the waterfront to keep my joints loosened up and to enjoy the rare beautiful day: 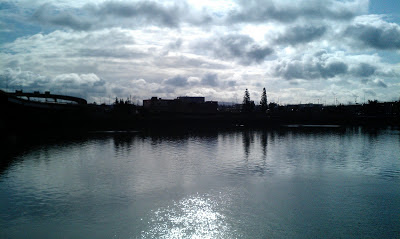 What can I say about that view?  I love my city, and it's times like this where I say to myself how lucky I am to be here.  There's no place I'd rather live.  One thing about us Oregonians, we appreciate sunshine more than anyone else in the US!

I meandered back over to the Irish Setter booth so that I could play with the dogs.  I wasn't there long before I turned around and saw Eric striding towards me.  I was pleasantly surprised since I really hadn't waited that long.  With a smile he was like, "I was able to run most of the race!  I only walked one time!"  I was so happy and proud of him, and still am!  We were both amazed at how well we did, especially since we thought we were going to suck!  We were starving, so we decided to wander over to the Portland Saturday Market to see what we could find.  It was 10:30 in the morning so there wasn't much open, but we managed to find a burger booth so that we could get a couple of cheese burgers.  I inhaled mine in probably about 45 seconds!  I probably should have had something a tad more substantial than cornflakes for breakfast, and I'm definitely going to have to figure out a better situation for the marathon.  It's one thing to run 5 miles on a bowl of cereal, but you can't be doing 26.2 miles with that!  We checked out the beer line at the race but it was still ridiculous, so we wandered around the city until we found an Irish bar who was letting Shamrock runners in for free!  Of course the drinks were a million dollars, but we were so happy to not pay a $15 cover that we just went with it.  We both got black and tans, and my race experience FINALLY felt complete. 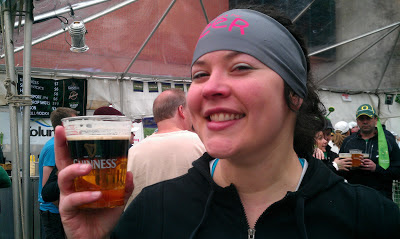