This weekend has been completely crazy, but in a good way!  We just chilled out on Friday, but Saturday we had a concert (Bob Seger and Joe Walsh), and today I planned to do a longer run since Eric was going to be off doing his own thing.

Yesterday I insisted we take a hike at Forest Park since the day was going to be sunny and pretty.  I also wanted to earn plenty of activity points so that I could use them for dinner that night before the concert.  I budgeted my points pretty well throughout the week, but I wanted to be able to have a couple of beers and a nice meal, so I wanted to make sure that I had enough points to cover me.  It was such a gorgeous hike, and not many people were on the trail, so it's like we were the only people in the world.  My husband is a music nerd, and this enthusiasm has spilled over to me, so we spent a lot of the time talking about music.  We talked about the Rock and Roll Hall of Fame (we are going to the ceremony again this year), who should be inducted, our predictions of who will be getting inducted next year, whether Nirvana or Pearl Jam was better.  Before we knew it, we had hiked up 3 miles!  Since what goes up has to come down, we turned around and trudged back, making for a total of 6 miles!  I snapped this picture on the way back down: 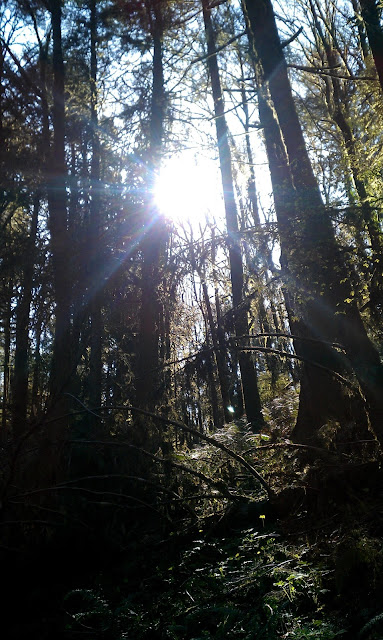 The restaurant we had dinner at was this place called E.A.T, An Oyster Bar.  It's a little Louisiana themed place, and it's one of the few "Southern" places I've ever eaten at here that does things right.  I got an Abita Amber right away, and it was so good!  It's one of my favorite beers from back home, and E.A.T. is the only place that I can ever get it up here! 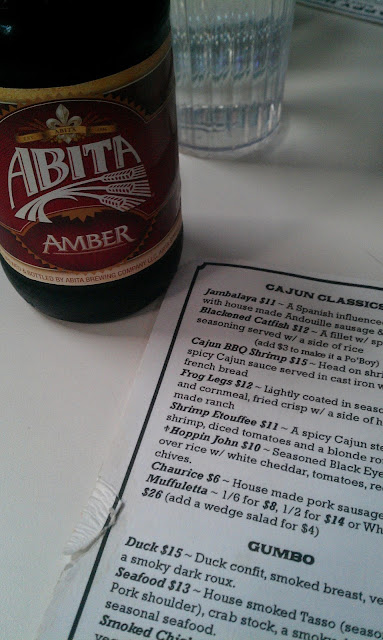 I meant to try to be reasonable with dinner even though I had plenty of extra points to get me through it, but I was so hungry that I not only ordered a shrimp po'boy, but also got raw oysters to share with Eric.  Oh, and a second Abita.  I meant to only eat the po'boy and not touch the fries, but I ended up eating all of those too!  The portions weren't huge, but I felt so uncomfortable after we ate.  Note to self, the second beer is always overkill! 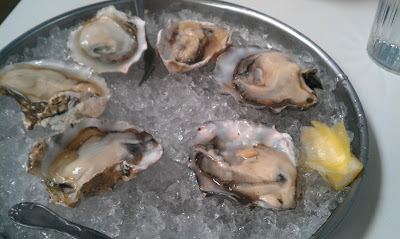 The concert was fantastic!  Joe Walsh opened up, and he was totally amazing.  I couldn't help but think of my dad, who LOVES Joe Walsh.  Especially when he played "Life's Been Good To Me", that is one of my dad's favorites.  You can't really tell from the picture, but he had a fantastically shiny shirt. 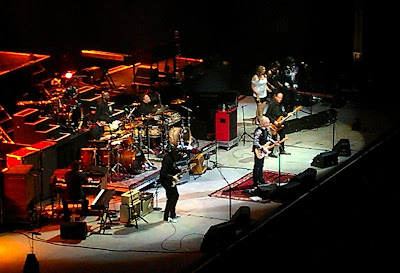 Seger was fantastic as well (that's him there in the corner in the picture below).  We were cracking up about how active and prancey he was, he never stopped moving the entire time he sang!  He put on a hell of a show, and you just forget how many hits he has.  (Eric does hate the song "Old Time Rock n' Roll", but it just simply reminds me of this episode of ALF...can't you tell I grew up in the 90's?) 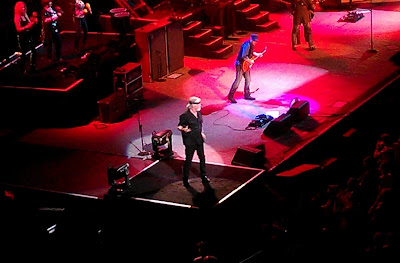 Today I woke up sore as hell, and thinking that there was no way I could do a long run today.  I put it off as long as I could...I ate breakfast, drank coffee and watched a few episodes of Golden Girls.  Finally at 8 I decided to put in my Yin Yoga DVD to try to get my muscles loosened up.  I can't believe I haven't done that sooner!  It made my body feel SO much better, even my crazy knee.  I finished all bright eyed and bushy tailed, ready to take on the world.  I got dressed, picked up my Garmin to turn it on...and it wouldn't.

I cursed.  I panicked.  I poked buttons.  Nothing would make my Garmin turn on.

So did I do my run?  Did I get a new Garmin?  Stay tuned until tomorrow for the answer!!  (Yeah sorry to do a To Be Continued, I just didn't want the post to get too long!)
Posted by Runs To Get Waisted at 3:31 PM