Wednesday Weigh In and Plastic Shavings

If you were thinking to yourself "Hmm, that broad hasn't posted for a few days.  She probably was guzzling alcohol and eating like shit for most of the weekend," then you are absolutely correct!  Yes, I had a bit of a setback, and I'm not really sure what happened.  Well, I kind of know what happened, I let my body image get to me and it made me say "screw it" for a few days.  I drank, I ate pizza and cookies, I watched football, I watched Breaking Bad marathons and barely did anything.  I did exercise Saturday, but did not exercise again until today.  Not surprisingly when I faced the scale today, I was at 222.0.  There is no picture to accompany this weigh in, I was pretty bummed out about it and it wasn't like I wanted to celebrate it.  Oh and forget the mini goals, we won't even go there. I mean I did drink water, but there was no schedule to it, and it probably wasn't nearly enough.

After my weigh in I decided I was tired of eating oatmeal, so I thought I'd try to see how a smoothie went down.  I didn't use any protein powder in it because I didn't want to trigger memories of my lovely poisoning incident.  Just straight up raspberries, a banana, almond milk and a dash of True Lime.  I was already bummed, then got super annoyed at my Ninja blender because it was making a crazy noise as it was blending.  I already feel like that blender is a total pain in the ass, so this really was about to put me over the edge.  I figured out it was making that noise because the blade wasn't set right, so as it was blending, it was shaving tiny pieces of plastic into my smoothie.  I stared at it for a bit, then decided I had pounded enough alcohol over the weekend to pickle my insides, what are 3-4 plastic shavings going to do to me.  I drank it kind of half heartedly, and it wasn't even over the plastic, it just seems like smoothies don't taste that great to me anymore.  I think I will go back to oatmeal tomorrow.

So I was carrying all of these lame feelings today and not feeling that great about myself.  We dragged ourselves to the gym, and I very reluctantly put on my running clothes to go do a 3 miler.  And I must mention, the weather turned back to rainy crap today, so I was really not looking forward to this run.  Even my Garmin was being a real bitch about it, it took FOREVER to find satellites before I could get going.  Once I got going, I noticed my legs felt better than they had the last 2 runs I did, and actually had some snap in them.  I ran a mile, took a 30 second walk break, and then got back after it.  As I neared 2.5 miles, I realized that I was on track to finish faster than I normally do.  (The irony of this is that I was just having sad thoughts about how I'm apparently never going to get faster).  I decided to try to finish in 36 minutes, since my last run I finished in 37:31.  I was really hauling ass (or at least my version of it), and even almost mowed down an old dude with a huge umbrella who refused to get out of my way.  I heard my Garmin beep to signal that I had finished 3 miles, and this is what I saw: 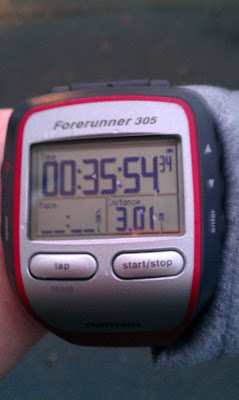 That's not only under 36 minutes, but it means that my average pace was less than a 12 minute mile!!  I was really pretty excited, and it was just the kind of boost I needed after gaining weight and eating plastic shavings today!!!  And who knows, with the way my body is, I may not be able to do this a day from now, but I did it today.
Posted by Runs To Get Waisted at 7:52 PM