I woke up today with that familiar pain in my left heel, and it made me pissed, scared and frustrated all at once.  I haven't gone into this at length yet, but I have been struggling with plantar fasciitis since around 2009.    For those who aren't familiar with the ailment, basically it's an inflammation of the connective tissue that runs along the bottom of your feet.  (You can read more detailed sciencey stuff about it at my friend Wikipedia).  It's extremely painful, and there were times that it got so bad that I would almost buckle to my knees in pain when I would stand on my feet first thing in the morning.  I brought it on by bad shoes and training improperly/too much, and also by not stretching enough, and it's the reason I didn't run for 2 years.  When I started my weight loss journey a year ago, I was doing yoga 3-4 times a week, and I noticed that my feet suddenly felt amazing for the first time in a really long time, and that's when I was able to start running again.  Lately my yoga studio has been pulling shenanigans and changing their schedule around, and making it almost impossible for me to go.  They have tons of classes during what my mom refers to as "rich bitch" hours, or 8 am to 2 pm.  I am not sure what the reasoning is behind that, but I kind of have a job during those hours, and  though my boss and I are close, he would probably frown on me randomly leaving during the middle of the day to go do yoga.  It's like, how do you not have classes for after work people??  Anyway, I"ve been rarely able to make classes there anymore, and since then, I've noticed that familiar twinge creeping back into my foot.  Now the twinge is a pain, so I've GOT to do something about it.  I want to keep going to this studio since it's so close to my house, but I don't know.  I may have to find another option.

I haven't been talking about food much lately, but I actually have eaten well this week, and have noticed that my weight is going down as well.  Nothing is ever "official" for me until Wednesdays, but I think my next weigh in should be a happy one.  :)  I made a really nice breakfast this morning: 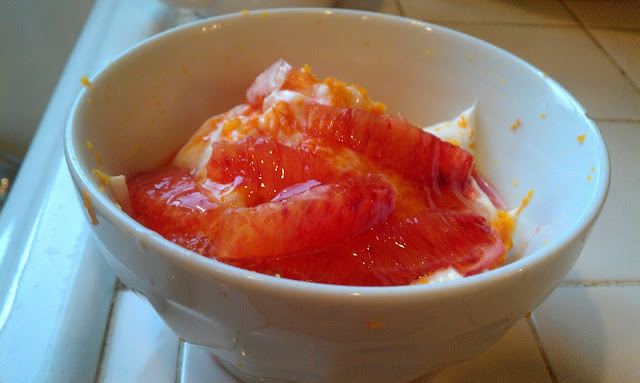 That's Chobani plain Greek yogurt, and I grated the zest of a whole blood orange in it, then cut up the blood orange segments in it and topped it off with a teaspoon of raw honey.  The zest was potent but delicious, and it felt like such a summery thing to be eating on such a dreary day.  All of that was a mere 231 calories, even though it felt very indulgent.  I planned out lunch already as well, I'm just having a grapefruit and a slice of Ezekial raisin toast with a smidge of butter.  I am trying to keep my day calories low because we're going to a benefit at the zoo tonight, and I'm not sure what the food situation is going to be.  I am doing my P90X yoga DVD today, so that would leave me with 1500 calories to use at dinner.  I would say that's PLENTY of wiggle room!
Posted by Runs To Get Waisted at 9:46 AM