Happy New Year!  We had a rip roaring time ringing in the new year last night.  We both sat on the couch, drank champagne, and I crocheted while we watched Return of the Jedi.  I know, we are both crazy people and probably should dial it back.  ;)

The partying, drinking and eating crappy has come to an end, and I started the first day of 2013 right, by going for a 3 mile run.  The fact that it was actually sunny and beautiful helped my motivation thankfully!  I knew that it was probably going to be a rough run since I haven't been consistent all through December, but I went into it deciding I would honor wherever my body was, and to not be too judgmental of how slow I was probably going to be.  It was also colder than hell, so I knew that was going to slow me down a bit.

So I set out and drove to a spot by our house that was a little nicer and actually has sidewalks to do my run. Right away when I got out of the car, I almost ate it in the parking lot due to a thin sheet of ice covering the asphalt.  My first thought was "Holy shit, I almost ate it in public", and the second was "I was just DRIVING on that."  All of that was followed by, "Well, this is going to be an interesting run!"  I did about a half mile walk to warm up through this quiet neighborhood that was on the way to the route I wanted to take.  Since the streets didn't have any sun hitting them, all the sidewalks were a sheet of ice, which really kind of sucked.  I was literally tip-toeing at certain points, and even that was questionable in points.  Luckily the spot where I wanted to start my run had the full sun blazing down on it, so the ice wasn't as much of an issue.  There were spots that were shaded where I literally had to slow down to almost a tip toe, so I definitely had to pay attention and be aware the entire run.

The run was about what I expected from a physical standpoint.  I felt clumsy, slow and HATED the first mile, as I typically do.  I did the first mile in about 12:30, which isn't exactly going to get me into the Olympic trials, but is also pretty good considering I hadn't run in a couple of weeks and I was dodging ice.  The next two miles were basically ok.  I overdressed for the run and didn't have on my wick away gear, so I was slightly uncomfortable in that regard.  Overall, I was pretty satisfied with how I felt, and finished in a little over 38 minutes. 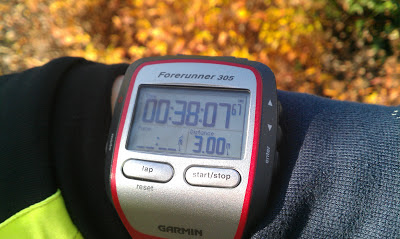 I will say that going for a run when the rest of the world is hungover totally rocks.  There was barely a soul to be seen, and those who were out there with me were also runners.  I really enjoyed being out in the sun, which we see so little of this time of year.  I was also amused by the antics of some of the birds I encountered on my walk.  There was a really beautiful woodpecker who was very annoyed by my presence.  He would fly to the tree ahead of me thinking that he was getting out of my way, only to have me continue forward, so he just kept one tree ahead of me for a good 5 minutes.  Finally he got wise and flew away entirely, chattering all the while.  Then I came upon a group of robins, which surprised me since it's January and FREEZING!  There were probably 5-6 of them, and they kept hopping ahead of me.  One finally flew in a tree above me and was giving me a very disapproving side eye for disturbing him: 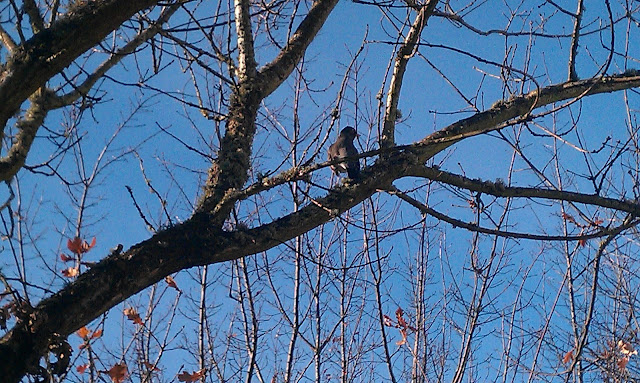