Last night we attended a benefit at the Oregon Zoo with one of my coworkers and his wife, and had a most excellent time.  It wasn't a super fancy thing, but they did have nice finger foods and an open bar.  They also had two comedians open up the event as the entertainment.  They were fairly amusing, though I was cringing at times because they were talking about strippers, sex and using the F word a million times.  Considering I have the maturity and sense of humor of a 13 year old boy, I was not offended by any of this, but there were a million little old ladies in there, so I was cringing on their behalf.  I didn't hear anyone complain, and people were laughing, so I guess all was well.

The benefit was in honor of the Painted Dog Conservation, an organization in Africa dedicated to saving the African Painted Dog.  They are in danger of extinction, so this conservation works to stop poaching, educate locals on the painted dogs, and provides jobs and education for the local people/kids.  The presentation during the benefit was pretty interesting, and was filled with pictures from Africa of both the dogs and the conservation center.  There were some sad pictures they threw in there too of the dogs caught in poacher snares, which I could have gone all evening without seeing.  :(  So sad.

There was a live and a silent auction, and while I didn't participate in the live auction (those items were pretty spendy), me and a couple glasses of wine did the silent auction.  (Seriously open bar, me and silent auction are a dangerous combo!)  I don't know if you've ever done one, but it's kind of like real life Ebay, and you end up getting super competitive if you want something.  I threw bids out for 3 items, and kind of hovered around 2 of the items I really wanted to see if anyone would outbid me.  By the time I sat down, I was still the #1 bidder for 2 of the items, but I wasn't sure if someone would come in at the last minute and throw a bid down.

I was pleasantly surprised (though my wallet may not have been) to see that I had won 2 of the 3 items I bid on once the evening was over! 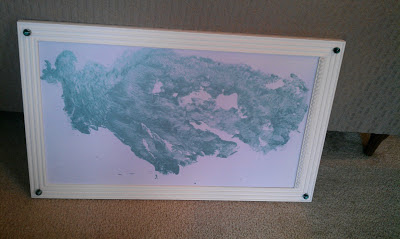 This is one of the items I won, and was definitely an impulse bid.  It's a painting done by a seal, no joke.  They put paint on its flipper and put it to canvas.  I don't know, it was so unusual and the pattern reminded me of the ocean, so I bid on it.  My husband seemed skeptical at first, but I think it grew on him the more he looked at it.  According to him, it looks like a T-Rex head, which I totally could see! 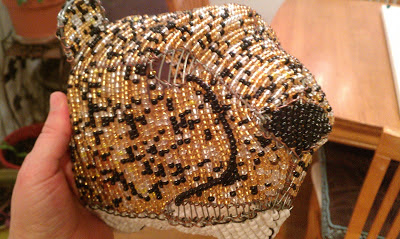 This was the other piece I won, and the one I was most excited about.  It's a cheetah wall piece, and all of that is beads strung on wire.  It was done by a local in Zimbabwe, and I thought it was one of the most pretty things I'd ever seen.  The picture doesn't do it justice, the bead work and the intricacy of it all is so incredible.  Plus I felt good knowing that my money would be going directly back to the artist who did this (they work for the conservation). 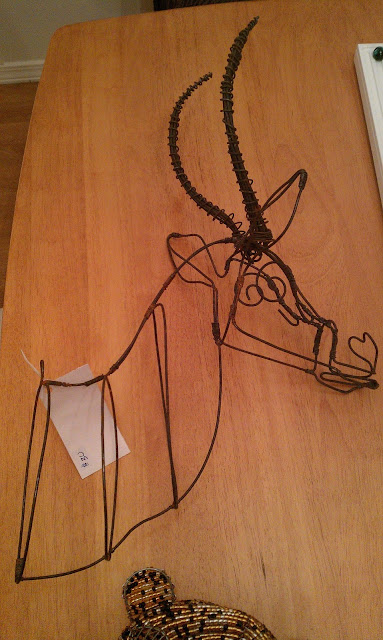 They also had art for sale, and I was so drawn to these wire pieces that I simply had to have one.  Part of what the conservation does is search for snares set out by poachers and take them down.  They bring the wire back to the conservation and use it to make art.  The thought of taking something used for something so ugly and turning it into something beautiful just really took my breath away.  And not only will this help save the painted dogs, but it also gives the local artists there in Zimbabwe a way to make money.  It was hard to choose a piece, they had so many exquisite ones, but I picked out a sable.  I really love the horns!

I got up today feeling good emotionally, but my foot is still bothering me.  I had my one yoga class that I can actually attend scheduled for this morning.  I was not looking forward to it, my teacher tends to focus on shoulders a lot, so we end up doing a million planks and other shoulder stuff, and all it gets me is sore arms for a week.  I got there a little early and was able to talk with my teacher and tell her that I was having foot/ankle issues again, and ask her if there was any way that the class could be geared towards the lower half of the body today.  And because she totally rocks, that's what we did for the whole class, and my legs felt so much better afterwards.

I still need a way to do yoga 3-4 times a week like I was doing, so I took the advice of my P.I.N.K friends and ordered the Ultimate Yogi DVD set yesterday.  I trust their feedback on it, which was very positive, and it also had rave reviews on Amazon.  The program is meant to be done 7 days a week, which I don't know if THAT will happen, but I will do my best.  I am going to take this week off of running, and will also be doing my P90X stretch DVD to tide me over until my UY DVDs get here.
Posted by Runs To Get Waisted at 2:04 PM