I am so ready for this week to be over.  Work has been mega weird this week, and I'm a bit stressed out about it.  I'm also on edge because I'm still worried about Natasha, who is not worse thankfully, but also hasn't made any astonishing improvements.  It's hard when something is wrong with your dog, simply because they can't tell you what is wrong, or what/where it hurts.  She's usually such a funny little goofball, so seeing her grimace when she gets up, not having her beg at the table, not pester us to play tug of war...all of that is very sad.  I'm just hoping she starts to turn a corner here soon.

I have managed to not eat my feelings as it were, and have definitely made an effort to be healthy this week.  I was telling you that I was on the fence about what to have with the baked salmon I was making, and that it would probably be something with kale.  This is what I ended up making: 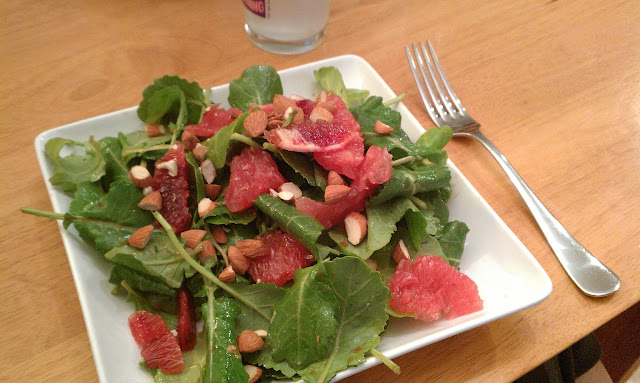 The base is all baby kale leaves, and I topped it with grapefruit, blood orange and raw almonds.  I made a dressing with black cherry balsamic vinegar, dijon mustard, honey and olive oil.  The dressing was SO good!  The weather has been so dreary lately, but this salad seemed so bright and summery that it really hit the spot.    And I just about flipped when I logged the salad into My Fitness Pal...that kale had 23 grams of calcium!  That is just crazy.  It even had 3 grams of protein (just the kale).

I continued the kale parade for dinner tonight, and made a recipe recommended to me by my PINK friends. It's a creamy quinoa kale casserole, but the "creamy" part is really just a sauce made of raw cashews.  I made a few changes to it, and soaked the cashews for a few hours so they'd be nice and soft.  I also used a green bell pepper, and the world didn't end.  I really liked the casserole, but think I will make some tweaks to it the next time I make it.  My blender was dirty, so I had to use my food processor to make the sauce, and it turned out all wack.  Next time I'd definitely use the blender.  The flavor was great though, and it was easy to make.  You also got a pretty big serving for relatively few calories.  I probably ate 1.5 cups worth of this, and it was 348 calories, 13 grams of protein, 6 grams of fiber, and 11 grams of calcium.  Those are pretty great macros!

I have been a real shit about working out this week.  No excuses really, but I admit the break has been nice.
Posted by Runs To Get Waisted at 6:48 PM