I had one of those confusing runs tonight where when you're done you say to yourself, "I don't know if that really sucked, or if that was kind of awesome."  I had planned on doing 3 miles, so after work I got all my gear on and set out from my usual starting point from our gym.  About a minute into the run I was not happy in the slightest, and I'm sure the look on my face would have rivaled Tommy Lee Jones' scowl at the Golden Globes.  Actually, this duo perfectly expresses how I felt during my first mile tonight:

I don't know if it was the cold, the fact I was hungry, or what was going on, but I was just downright pissed to be out there.  My legs felt like lead, I felt slow and tired, and I was muttering the Danny Glover "I'm too old for this shit" line over and over in my head.  I usually can zone out and get into the run, but I was struggling mentally and having to constantly have a dialogue with myself to try to keep going.  (This dialogue wavered between, "You can totally do this!" to "Quit being a freaking pansy."  Only more explicit.)

Then I don't know what happened.  My Garmin beeped to signal that I had done a mile, and I told myself to try to keep running as long as I could without taking a walk break.  Then before long my Garmin was beeping that I'd hit two miles.  I took a one minute walk break, and started going again.  My legs were burning horribly, but I knew if I took a long walk break, I was never going to get going at a good speed again.  I misjudged the route I took and how long it was, so when my Garmin beeped at three miles I still had quite a bit to go before I hit the gym parking lot.  I was like, well, I guess I will just do 3.5 miles then.  I hit the gym parking lot and looked down to see that I was at 3.6 miles, and if there is anything that drives me nuts, it's running a weird distance number wise.  It's either got to be whatever mileage and a half, or an even number, and yes I am psychotic.  So I just continued to run up and down the sidewalk until I hit an even 4 miles. 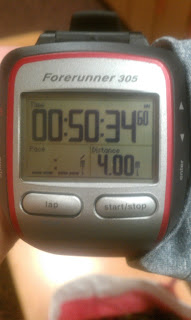 My time wasn't terribly exciting, I came in at 50:34.  I am stressing a bit that I am not getting any faster, but I guess I shouldn't be freaking out too bad yet.  I figure as I continue to train and lose weight that the speed will eventually follow.

I guess the bigger question is, how could I start out feeling so crappy, but go further than I had intended and also take very few walk breaks?  I am just processing that I feel pleased about going the extra mile (literally!), because I honestly felt like I was so miserable during the run, I couldn't really process it then.  Running is so freaking weird sometimes.
Posted by Runs To Get Waisted at 7:31 PM