I have slightly recovered from yesterday.  I don't have nausea, but my lungs/chest burn pretty bad, and my ribs are still sore.  I cannot seem to get enough water and tea today, especially my fancy Teavana Youthberry tea: 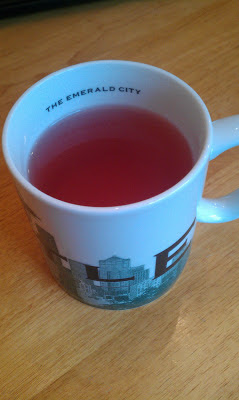 I have been grazing a lot today, mainly because I think I am still messed up and hungry from everything that happened yesterday.  I hadn't intended on working out, but since I did graze a bit, I felt that I should go ahead and do a workout to justify the extra calories.  One of my guy friends kindly lent me his copy of the P90X series.  I have been curious about it for awhile, but not curious enough to spend the hefty price tag to get it.  I don't really have interest in doing the videos daily as intended, I already have a strict schedule with having to run, but thought it would be nice to mix things up and do some of the P90X videos once or twice a week.

I went through the DVDs and immediately gravitated towards the Yoga X disc.  I have been practicing yoga on and off for years, but have consistently practiced it several times a week for the last year.  I credit yoga for healing my feet, for changing my body shape for the better, and for making me a better person.  I know yoga can be controversial, many people think it's some kind of cult or weird religion, some people think it's boring, some hate it.  I don't understand any of that thought process, and I personally think the people that think that way could not only use a good yoga session, but a shot of tequila as well.  Just my opinion.  ;)

Some thoughts on the video.  If you are new to yoga, this video is going to be pretty hard.  I found it challenging but was able to keep up with it pretty well.  I was definitely happy that I didn't have the heat going in the house, because I was pretty warm!  I have seen various complaints about this disc of the P90X series, and I admittedly had a few moments of yoga snobbery where I was like "Hmm, that's totally not the right name for that pose."  But, I actually really liked the video, and found it both relaxing and a good workout.  The one thing that may trip people up is the running time of this video, which is an hour and a half.  I personally liked how long it was, but it would be tough to fit in if you are busy.  The other thing that is tough?  If you have a nosy ass dog who likes to hover over you when you're on the floor doing some of the floor poses.  This was my glorious view for most of the time that I was on the floor....*sigh*  She thinks bugging me is hilarious. 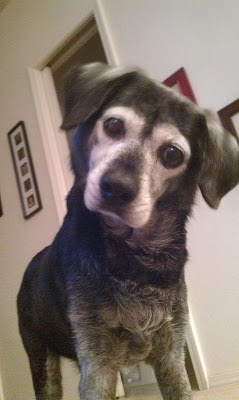 I felt great once I was done, and definitely will be adding the yoga video to my routine at least once a week.  Once I was done I was starving for dinner, so I was very happy to have veggie chili made and ready to go: 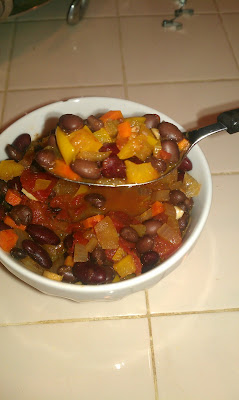 Today's meal plan has been hard.  As I said I have been very hungry, and am still very hungry unfortunately.  Again, I think my system is messed up, and I will probably be better by the time I get to work tomorrow.  With today's exercise I am allotted 2,029 calories, and I have the feeling I may reach that by the end of the night!

Breakfast:  Oatmeal with chocolate chips
Lunch:  Carrot "hot dog" in Ezekiel bun with guacamole
Dinner:  Veggie Chili
Snacks (this is where shit gets real):  grapefruit, granola with Barney Butter, handful of chocolate chips, and popcorn with nutritional yeast...told you I was grazing!

It's a lot, but at least I am only going to net a little over 1400 calories. Once I'm done with the popcorn, I'm going to drink a crap ton of hot tea so that I will feel full (hopefully!)

Posted by Runs To Get Waisted at 7:52 PM