I had a great run today!!  I'd really just intended to do 3 miles, but ended up doing FOUR!  Not only that, but I usually have to take a walk break immediately after running the first mile, but this time, I was able to run 2.4 miles straight before taking a walk break.  One huge difference was that I wasn't going at too fast a pace.  Sometimes I tend to do that, and then I get super winded and have to take more walk breaks than I would like.  Physically I felt really good and had tons of energy.  It was SO cold though, and I forgot my gloves like a dummy, so I was pretty miserable for the first 1.5 miles until I really warmed up.

The only sort of negative thing was that I had my first dog encounter.  I guess these things are to be expected, and I'm sure I will have more, but it was definitely a nerve wracking moment.  I was running through a neighborhood and some guys were out working on their car, and had their blue heelerish type dog out there with them.  The dog wasn't leashed, and I could tell by the way it was staring me down that it wasn't digging me being that close to its yard.  I slowed down, and the dog charged towards me barking.  As hard as it was, I did was you're supposed to do and stopped in my tracks and stayed perfectly still, and was talking softly to the dog.  It stood there barking with its hackles up, and I averted my eyes so it wouldn't perceive me as a threat.  Finally its owner came over and started yelling at it, and it reluctantly came back to him.  The guy apologized to me profusely, when took my annoyance factor down a touch.  I have owned dogs all of my life, so I know it was just protecting its yard, plus I probably looked threatening jogging towards it.  I told him it was ok, nothing bad happened and the dog was protecting its yard, so no harm done.  I wasn't angry with the dog really, just kind of disappointed that some people don't realize the importance of leashing their dogs.  It also drove home the fact that I need to look into getting some kind of pepper spray or those shock knuckles for my runs.  I would be sad to ever have to hurt an animal, but I also would prefer to not be bitten.  It would also be a good insurance policy against creepers. 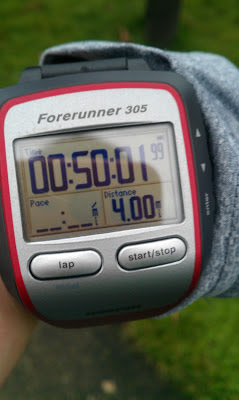 All in all it took me 50 minutes, so that breaks out to about an average pace of 12:50.  I would argue that I was probably faster, but that stupid ass dog caused me to stop for at least 30 seconds, and it wasn't like I made it a point to stop my Garmin during that lovely sphincter clenching moment.  On the bright side, my run burned 669 calories!

Breakfast and dinner are definitely hefty on the calorie side, but I am still below my macros for the day, and will net 1,276 calories.

Posted by Runs To Get Waisted at 2:03 PM

Email ThisBlogThis!Share to TwitterShare to FacebookShare to Pinterest
Labels: running