All The Tea In China

So, my final Cyber Monday purchase was delivered today, and I had to share it with you, because it's both irritating and hilarious.  This is about to become overtly clear, but I am a HUGE Teavana fan, though I am not so much a fan of going to their store.  They lure you in with their free tea samples, all sitting there delicious and perfectly sweet like an herbal crack rock.  Then you get in there and they flap and waft a million different tea samples in your face, and each smells more lovely than the next.  We bought a grip of tea a couple of months ago, and ended up finding flavors that we don't think we can live without ever again.  We were running dangerously low, so I decided Cyber Monday was the perfect opportunity to get a deal and stock up on our favorites.

They did have a great deal.  You got free shipping, a free tea tin and a free sample.  The problem was that everyone on earth thought that Teavana's offer was a great deal, so their site was horribly buggy.  Long story short, my freaking order went through TWICE.  I was totally pissed, but at the same time my husband and I do drink Teavana stuff at least once a day, so I decided not to call and bitch to them about it.  Plus, I went on their Facebook page and it sounded like several people had the same nightmare, and couldn't even get reps on the phone.  There are some situations where your time is worth more than sitting on the phone and fighting "The Man".  Anyway, my shipment came in today and I had to take a picture of it: 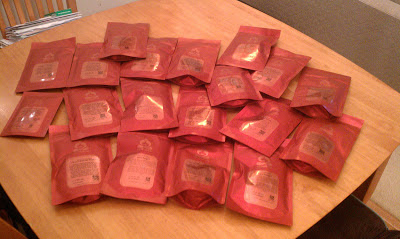 This?  This is what a Cyber Monday purchase gone wrong looks like my friends.  Actually, it's what it looks like when a site is woefully unprepared for Cyber Monday.  Isn't this utterly ridiculous though?  And they pissed me off because they only included one tea tin even though the orders were two separate orders!  I mean honestly, I use canning jars to store my tea in anyway because I have a ton of them around, and I'm not paying $15 for a 3 ounce tin.  Still, I wanted my second free tin! 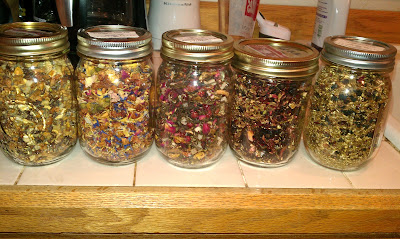 On a positive note, I am pretty excited to be stocked back up on my favorite teas.  Don't they look pretty lined up in their jars?  One of my very favorites is the Pineapple Kona Pop.  There is no way to describe the smell other than tropical heaven and pineapples.  It is lovely by itself, but also blends well with a lot of the other teas.  I love the way the tea has those beautiful blue cornflowers in them. 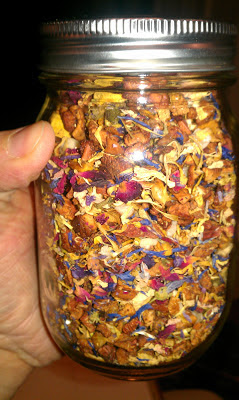 The sample tea we got was the Maharaja Chai/Samurai Chai blend, and we decided to make some tonight as our usual nightly tea.  Unfortunately the blend they gave us had way too much of the German rock sugar in it.  It was sickly sweet, so much so that I had to add a ton of water to my cup to dilute it.  Shame, because the smell of the tea itself was spicy and gorgeous, I just wasn't into the sugar part of it.