Well, tomorrow is my birthday, and I thought the best way to celebrate another passing year in my 30s would be to run 3.1 miles!  I also invited a bunch of my friends to come out and run the 5k with me, and surprisingly they were crazy enough to agree.  It sounded like a great idea at the time, but apparently I did not remember that I live in Oregon, and that is currently December and the weather SUCKS big time!  Come to think of it, this is my first winter race I've ever done, and I'm still not sure if I'm sold on them.  ;) 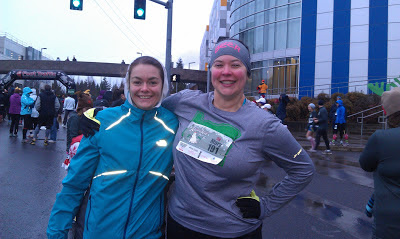 That is my friend Tara and I before the race, and I'm sure you can tell how super cold we are!  Tara's birthday is tomorrow as well, and we are only a couple of hours apart in age!  Pretty neat huh?

Back to the race...I am sure I have been that miserably cold and wet in my life, but I certainly can't remember when that would have been.  Our meteorologists need to get a freaking Farmer's Almanac, because they never seem to get the weather right.  They did call for rain today, but said that it was not going to start until later in the afternoon.  Of course, it POURED the entire time we were at the race, and it was around 39 degrees.  I literally could not feel my fingers and toes until well after the first mile!

The race itself went ok.  Admittedly, I have not run for 2 weeks, and it definitely showed in my performance.  I had a horrible side stitch and had to take walk breaks, and I simply didn't have the energy or stamina that I normally do.  I am also not used to running with people, and one of my friends and I were having a grand time gossiping about people at work the whole run.  The problem is, gossiping/talking takes breath and air, which I desperately needed during that race!  I still finished in about 37 minutes, which isn't bad for taking such a long break.  I'm still not satisfied with that

Despite the weather, having my friends there made everything worthwhile.  I was so touched that they came out and ran with me in such crappy weather.  This is all of us after the race, with yours truly all the way to the left! 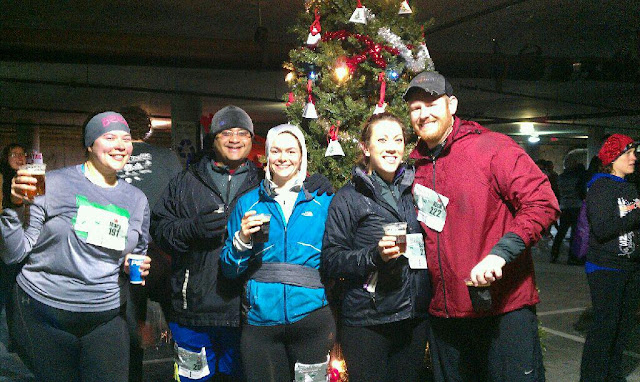 See what I mean about having awesome friends?  They even had smiles on their faces despite how soggy we were!  My husband is the one who was taking the pictures, and talk about a trooper....he was supposed to run with us but has a horrible cold.  Despite all  of that, he stood in the cold and rain to cheer me on today.  What a guy right?

Posted by Runs To Get Waisted at 8:08 PM